You are here: Home1 / Detox2 / Cheese Is Like Heroin 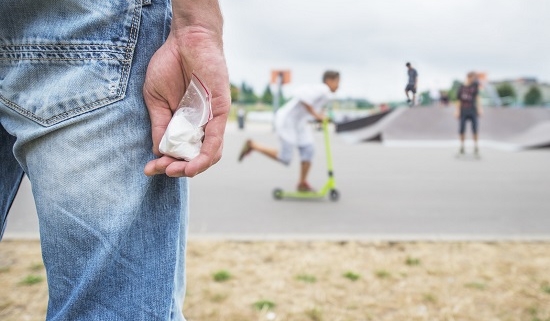 At first glance someone reading that title might conjure up images of Gouda or Brie and imagine that, yes, yummy cheese might be just as addicting as an illicit drug such as heroin. Only in this case, cheese is heroin. Yep, a strange concoction made of black tar heroin and regular drugstore medications like Tylenol PM or Benadryl that was born in Dallas Texas about 13 years ago is known in drug circles as “cheese.” The name was chosen because the drug resembles Parmesan cheese.

Although cheese is like heroin, cheese heroin is a unique product that has been marketed specifically to children. In Dallas, 40 people, may of them children, have lost their lives in since the drug was made available. The mixture of heroin and diphenhydramine, the drug found in the OTC medications being used, creates a powerful sedative effect that can slow breathing to a dangerously low rate, even stopping the respiratory response altogether.

Cheese heroin is an illicit drug often marketed to kids and young teens. The drug consists of 2%-8% of black tar heroin combined with the antihistamine called diphenhydramine, most commonly found in Benadryl, or acetaminophen, the active drug in Tylenol. Actions taken to curtail the manufacturing of cheese heroin were instituted in 2007. Local drugstores systematically removed products commonly used to make cheese from the shelves. These included such medications as Tylenol PM and others that contained diphenhydramine.

Cheese heroin is snorted, not injected, making it more accessible to young people who may be repelled by needles or injections. In fact, children as young as fourth graders were found to be using cheese in Dallas elementary schools in 2007. Dallas police referred to the drug as “starter heroin.” Cheese heroin was responsible for 40 deaths in the Dallas, Texas area since 2004.

Children are tempted to try the drug as claims that it will offer positive effects, helping them fit in socially or make them more “cool.” The drug is very cheap, about $2 per hit, again, making it accessible to kids. The effects of the drug include a sense of euphoria, disorientation, lethargic, and feelings of hunger and thirst. Cheese can cause death by depressing the cardiovascular system to the point that heart and respiratory rates plummet and cease to function. Overdose risk is increased if the teen also uses alcohol with the cheese heroin. A child can die after just one hit of cheese heroin. In addition, the Tylenol can cause major liver damage as well.

Because cheese is like heroin, drug dealers look at cheese heroin as an entry drug that can result in a full-blown heroin addiction over time. Dealers target schoolyards or school events to lure kids to the drug. They tell the kids the cheese will help them out, help them fit in or feel better. All the while, the dealers were only cultivating naïve children to fulfill a future role as an addict. Initially the majority of the kids who were falling prey to cheese heroin were Hispanic, as the drug pervaded other regions of North Texas and beyond whites and African-American kids were also succumbing to the drug. Cheese heroin is an insidious drug of which the dealers have solely malevolent intentions.

Being that cheese is like heroin, the warning signs that it is being abused are basically the same. Signs of heroin abuse include:

Cheese heroin poses a risk to anyone who uses it, and especially kids or young teens who are not familiar with the long-term dangers of opiates such as heroin.

Getting Treatment for Cheese Heroin Addiction

Since cheese is like heroin, the treatment approach for cheese heroin addiction is the same as for any opioid or opiate. Treatment will involve three basic steps, including:

For individuals who are addicted to cheese heroin, or heroin in any form, a medically monitored detox is the first step of the recovery process. During detox a trained team of detox providers will guide the individual safely through the withdrawal symptoms that will resemble a harsh flu. Medications will be administered to help relieve the withdrawal symptoms.

Detox and withdrawal can take 5-7 days to complete. The length and severity of detox will depend on how long the heroin abuse was going on and what levels of consumption the individual was using.

After detox, the individual will begin to learn how to change the behavior responses that have wired them for using heroin. The treatment process involves :

Psychotherapy: Cognitive behavioral therapy (CBT) is an effective short-term therapy that is helpful in treating individuals with an addiction. The thought and behavior patterns that become established as a result of addiction are examined and changed in CBT.

Family therapy: Family counseling is important, especially if the individual needing treatment is a youth. Certain rehabs will cater to adolescents and family-focused therapy assists the family members in acquiring better communication skills, putting down boundaries, and restoring trust.

Group counseling: Group sessions offer an opportunity for individuals in treatment to share their experiences, fears, challenges, and to offer support to each other.

Medication assisted treatment: MAT is becoming a core treatment element in opiate addiction recovery. The drugs, including methadone, buprenorphine, Suboxone, or naltrexone, can help to reduces cravings and the desire to engage in drug-seeking behaviors. MAT can increase the odds of individuals achieving a sustained, long-term recovery by reducing the risk of relapse.

12 step program or similar: Recovery programs, such as the 12-step program from A.A. or a non 12-step program like SMART Recovery offer opportunities to build peer support systems. Using the themes of these programs individuals work through various steps that can help them overcome their dependence on heroin.

Holistic elements: Stress is one of the most significant triggers for drug relapse. Because of this fact, rehabs are increasing the use of holistic treatment elements in their comprehensive programming. These activities can help teach individuals how to self-regulate stress and anxiety and might include deep breathing techniques, mindfulness, journaling, exercise, massage, acupuncture, art therapy, and meditation.

Once the individual has completed the addiction treatment portion of the recovery program, he or she will “step down” to outpatient continuing care services. These may include a period in sober living, ongoing outpatient counseling, and active participation in a 12-step community such as N.A., A.A., or SMART Recovery.

It is possible to overcome a cheese heroin or heroin addiction with a commitment to accessing the recovery tools taught in rehab that can help when cravings or other triggers threaten recovery.

Solutions 4 Recovery offers the most effective comprehensive approach to treating opiate addiction and dual diagnosis. After a thorough intake evaluation and review of substance abuse history, medical history, and mental health history, the expert clinical team will design a fully individualized treatment strategy and continuing care plan. Approaching addiction treatment from various angles creates an integrated plan that uses not only evidence-based therapies, but includes adjunctive therapies and holistic activities to the mix for the best recovery outcome. For more information about the program, please contact Solutions 4 Recovery today at (888) 417-1874.