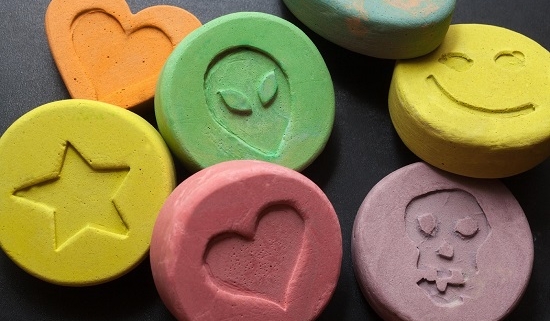 It’s hard to believe that pastel colored tablets with cute little images stamped on them, and nicknamed with an innocuous name like Molly, could be all that dangerous. But Molly, otherwise known as MDMA, Ecstasy, or 3,4-mthylenedioxy-methamphetamime is anything but tame. MDMA is a synthetic drug created out of both amphetamines and hallucinogenic compounds, and has a history of popularity among young partygoers. All-night dance parties, called raves, initially put MDMA on the map decades ago, although now the drug has a wider audience outside of the electronic music scene.

MDMA dependence is a potential outcome of chronic use of the drug. As with all substances of abuse that alter consciousness, MDMA can cause long-term dependency consequences. While officially the jury is still out regarding whether or not MDMA is addictive, the bulk of the evidence tends to point to this compound as being capable of causing a chronic user to form an addiction to it.

The Effects of MDMA

MDMA produces rather enjoyable effects. Individuals who ingest this drug will soon experience feelings of pleasure, emotional warmth towards others, increased energy, and a distortion in time and sensory perception. The MDMA compound impacts three brain chemicals, including dopamine, norepinephrine, and serotonin. This can lead to an array of sensations, including:

MDMA effects last about eight hours, and for the following week users may experience certain after affects, such as memory problems, sleep disturbances, anxiety, depression, impulsive behavior, aggression, loss of interest in sex, and suppressed appetite.

As with other illicit drugs, individuals who purchase MDMA may be unaware that other substances have been mixed with the drug causing unforeseen dangers. MDMA may be mixed with cough medicine, bath salts, cocaine, caffeine, ketamine, or ephedrine. Users may combine the MDMA with other substances, such as alcohol or marijuana in an attempt to increase the effects of the high and possibly resulting in serious effects. In 2011, The Drug Abuse Warning Network reported that about 250,000 people landed in the emergency room due to the effects of MDMA.

Some of the dangers of using MDMA include experiencing mild psychosis, promiscuous sexual activity, driving under the influence, and a compulsive need to re-experience the high, which can lead to addiction or dependence. In addition, individuals using MDMA may experience blurred vision, chills, muscle cramping, and teeth clenching. Because MDMA affects the body’s ability to regulate temperature, high body temperature may result that can cause liver, heart, or kidney failure. In addition, a condition called serotonin syndrome is a potentially life-threatening long-term effect of chronic MDMA abuse.

Treatment for MDMA dependence will revolve around changing behaviors. This is accomplished through cognitive behavioral therapy (CBT), which guides individuals in identifying their triggers, disordered thoughts, and subsequent need to use the drug. By targeting this dysfunctional thought/behavior pattern and replacing it with positive messaging and proactive behavioral responses, the individual will train themselves how to respond to future urges to use.

MDMA treatment will likely include a medley of treatments, including individual psychotherapy, group therapy, medication for a coexisting mental health disorder, family therapy, addiction education, relapse prevention, and holistic activities. Following the completion of the program, individuals are advised to further reinforce recovery by continuing to receive weekly outpatient counseling, and to participate in a recovery community.

Solutions 4 Recovery is a dual diagnosis treatment center located in South Orange County, California. Placing a significant emphasis on designing fully individualized treatment plans for individuals struggling with a drug or alcohol addiction, including those with a co-occurring mental health disorder, the clinical team at Solutions 4 Recovery believes that each person’s recovery needs are unique. By taking into consideration all the specific nuances or features involved in the individual’s diagnosis, the treatment team will create a plan that is relevant and customized, yielding the best recovery results. For more information about the program, please contact Solutions 4 Recovery today at (888) 417-1874.

Signs of an Alcoholic Relapse